Today he has more than 400 stores.

The payroll for those 4,000 people is an estimated $40 million. And the taxes they pay on that money are about $6 million.

“Then there’s a significant amount of non-direct employees. The food distributor. The truck driver. The packers. All of these people that we buy products from and they deliver to us,” said Saifi. 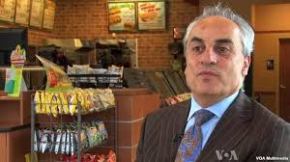 During its 2012 fiscal year, the Greenville Goodwill helped find jobs for nearly 7,300 people – people who otherwise might have depended on taxpayer-funded assistance programs. Instead, they collectively earned more than $75 million. All because of help from one man who came to the United States chasing his own dream.

This entry was posted in Business and entrepreneurship and tagged Awards, charity, Iranian-Americans, Philantropy, Top-Posts. Bookmark the permalink.